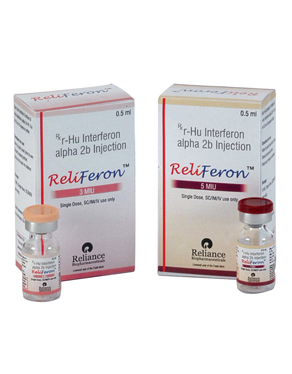 ReliFeron belongs to the class of interferons (IFNs) which are natural proteins produced by the cells of the immune system in response to foreign agents such as viruses, bacteria, parasites and tumor cells.

Interferons are produced in body primarily from leukocyte, fibroblast and immune cell and the important ones are α, β, and γ. Interferons assist the immune response by activating natural killer cells and macrophages, promoting antigen presentation to lymphocytes and thus inducing the resistance of host cells against foreign agents. Interferons also have direct anti-viral effects.

Recombinant IFN-a is now approved worldwide in over 40 countries for the treatment of more than 14 malignancies and viral diseases, including adjuvant therapy in metastatic melanoma, condyloma acuminata, Kaposi's sarcoma and most importantly hepatitis B and C. Interferon-a has been shown to be effective in suppressing viral replication and in inducing remission of liver disease caused by chronic hepatitis B and hepatitis C virus infection.

ReliFeron is a purified sterile human recombinant interferon product classified as an alpha interferon. It has 165 amino acids, with a molecular weight of 19 kDa. ReliFeron is obtained by recombinant technology using Escherichia coli with an interferon alpha 2b gene from human leukocytes. It is used in the form of parenteral injection.

Each vial of ReliFeron contains 3 or 5 million IU recombinant human interferon alpha 2b in 0.5 mL of aqueous buffer.