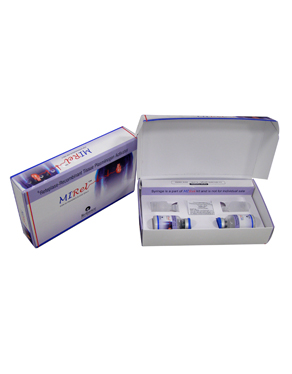 MIRel (Reteplase) is a single chain deletion mutant of alteplase that is expressed in Escherichia coli and, therefore, is expressed as an unglycosylated protein (355 amino acids) with a total molecular weight of 39 kDa.

The molecule consists of cringle 2 and the protease domain of the alteplase molecule. Because of the deletion of the fibronectin finger region, the binding of reteplase to fibrin is significantly reduced in comparison with that of alteplase. Although kringle 2 (known to stimulate protease in the presence of fibrin) is part of the reteplase molecule, reteplase is stimulated in the presence of fibrin to a lower extent than alteplase, suggesting that the fibronectin finger is involved in the stimulation of the protease as well.

The elimination of reteplase from the circulating plasma predominantly occurs in the liver. Because of the deletion of the fibronectin finger region, the epidermal growth factor domain and kringle 1, as well as the carbohydrate side chains, the hepatic elimination of the molecule is reduced. Consequently, plasma half life is increased to 14-18 minutes (versus 3-4 minutes with alteplase).

This allows reteplase to be administered as boli (versus as an initial bolus followed by an infusion, as with alteplase). The best results have been obtained with a double bolus of 10 U each 30 minutes apart in the case of an acute myocardial infarction.

Reteplase was superior to alteplase (administered over three hours) with respect to patency of the infarct related coronary artery. With reteplase patency was reached earlier and more frequently than with alteplase.

Each kit of MIRel contains two vials of 10 units of Reteplase each, sterile water for injection, two syringes and four needles