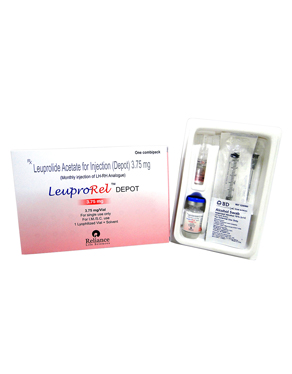 Leuprolide acetate is a synthetic nonapeptide analogue of naturally occurring gonadotropin-releasing hormone (GnRH or LH-RH). The analogue possesses greater potency than the natural hormone. It is available in a vial which, when mixed with diluents, become a suspension intended as a monthly intramuscular/ subcutaneous injection.

LeuproRel™ DEPOT developed as a depot preparation of Leuprolide acetate using micro-encapsulated formulation demonstrated continuous release of the drug for 4 weeks and the effective suppression of testosterone after a subcutaneous injection monthly.

LeuproRel™ is indicated in endometriosis and uterine leiomyomata (Fibroids). LeuproRel™ Depot is to be administered subcutaneously/ intramuscularly, varying the injection site periodically, depending on the indication, under the supervision of a physician.

Each composite pack of LeuproRel™DEPOT 3.75 mg contains: One vial of Lyophilized powder of Leuprolide acetate, one ampoule of diluent for reconstitution (2 ml), one sterile syringe, two needles and one alcohol swab. To be reconstituted with diluent.