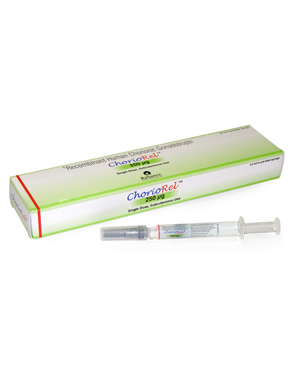 ChorioRel is recombinant chorionic gonadotrophin hormone (r-hCG). It belongs to a class of hormones called gonadotrophins, which are involved in normal control of reproduction. ChorioRel is indicated in women undergoing assisted reproductive techniques (ART) such as in-vitro fertilization (IVF) to bring about ovulation trigger (release of eggs).

ChorioRel is a glycoprotein containing two sub-units. The alpha subunit is of 92 amino acids and beta subunit is of 145 amino acids. It is manufactured by recombinant DNA technology using genetically engineered Chinese Hamster Ovary cells. Recombinant hCG, since it is a pure protein product, containing only hCG and no other contaminants or free proteins, subcutaneous administration is advocated. Thus there is high patient compliance associated with the product. Also the amino acid sequence of ChorioRel is identical to that of native hCG.